Sometimes change can come in the form of one big leap, as the French Parliament and Senate proved this week. After years of lagging behind other EU countries in animal welfare protection, France officially adopted its first-ever animal welfare bill today. This historic bill includes a national ban on the use of all wild animals in traveling circuses, which will come into full effect within 7 years. The breeding, buying and selling of wild circus animals will be banned within 2 years. The bill also stipulates that France will enact a Positive List to regulate the exotic pet trade, making France the 8th EU Member State to adopt this important measure.

Exactly one year ago, the French government announced it would take several long-awaited measures to improve the welfare of wild animals in captivity, namely a ban on the use of wild animals in traveling circuses, a ban on the farming of mink for fur, and a ban on the use of orcas and dolphins in dolphinaria. This past year, the French Parliament and Senate have been working hard on the creation of an animal welfare bill to implement the announced measures. Today, that bill was definitively adopted, and in a way that exceeded our expectations! Not only did the bill ensure the enactment of the proposed measures, it also included important additional measures, such as the development of a Positive List of safe and suitable pet species.

“This bill is an incredibly important milestone”, says David van Gennep, CEO of AAP. “For years, France has been the number one country from which AAP rescues circus animals, as well as the country from which we receive the most rescue requests for exotic pets. We’ve seen the heartbreaking suffering that circus animals and exotic pets have had to endure, so the fact that France has finally taken legislative steps to end both these practices, well that’s just a double victory!”

With this bill, France becomes the 25th EU Member State to adopt restrictions on the use of wild animals in circuses and the 8th and largest EU Member State to opt for a Positive List to regulate the exotic pet trade. “We are so proud of our partners in France who worked tirelessly to create the necessary political support for these measures, and skillfully managed to succeed!”, says Alejandra San Quirico, Head of Public Policy at AAP. “We will continue to support our French partners in every way we can to ensure that this bill gets implemented promptly, effectively and in the strongest way possible. The adoption of this bill also shows that there is growing momentum within Europe for the types of regulations that AAP wishes to see at EU-level as well. Our fight for an EU-wide ban on wild animals in circuses and an EU-Positive List will continue, but we are now another leap closer!”

Black leopard Bono saved from being a pet

AAP brought a black leopard to its Spanish rescue center on Monday December 6. Bono, a three year old male, was illegally kept as a 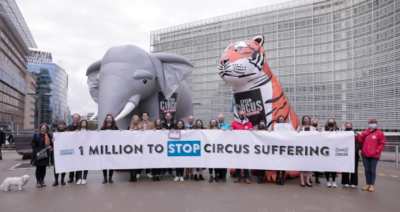 Handover of most succesful animal petition ever During a ceremony in front of the European Commisson headquarters, Eurogroup for Animals and its members, along with

1 in every 7 exotic pets carries a zoonosis

A study we published today reveals that exotic pets frequently carry zoonotic viruses, bacteria or parasites – diseases that animals can transmit to humans. Of